The Rwenzori Mountains are unique ranges straddling along the equator an area of hot tropical climate region with ice!, it is regarded one of  UNESCO heritage sites lying in western Uganda along the border with democratic republic of Congo, the snow-covered equatorial peaks rise to a height of 5,109m and lower slopes are Covered in moorland and rich montane forest. The park is noted for its beautiful flora, it has five distinctive vegetation zones which change according to changes in altitudes. Mountain climbing, hiking and nature walks, birding and cultural tours are some of the most engaging adventures at the park. The Rwenzori Mountains are some of the world’s best places to hike, the park covers approximately 998 square kilometers, the highest peak of the mountains is Margherita (5,109m) it may not be the highest of mountains but is still the 4th highest mountain in Africa. 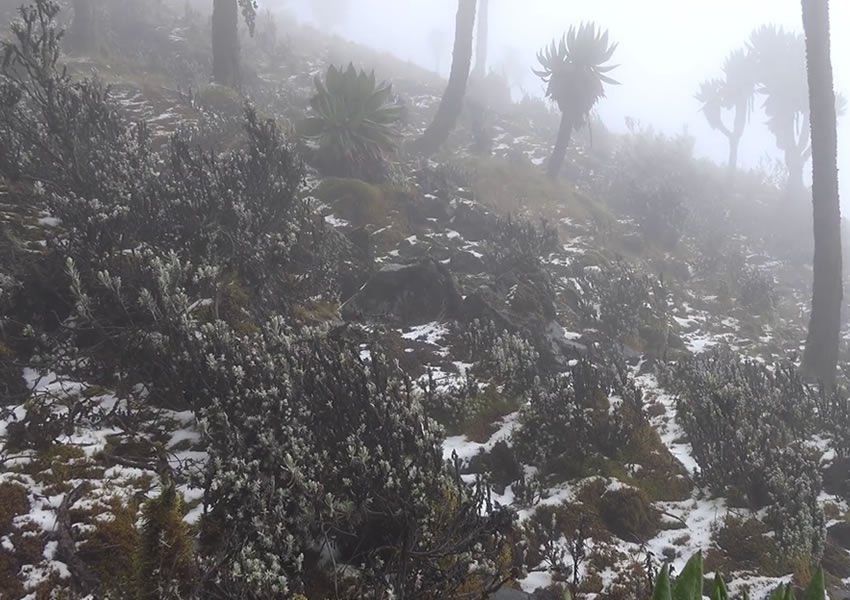 The national park was gazette as a national park in 1991, and recognized as a world heritage site in 1994 and a Ramser site in the 2008, Rwenzori Mountains has a diversity of trees and plant life. The park’s flora has been described as some of the most beautiful in the whole world. The park has several mammal and animal species. Its wildlife varies with elevation, the most distinguished species include; the forest elephants, duikers, black and white colobus monkeys, hyrax. The other mammals include; the Ruwenzori golden mole, lesser cane rat, Ruwenzori olive squirrel, shaggy swamp rat, tree or sun squirrel, giant squirrel, marsh mongoose, long-haired mole rat giant foresthog and the harnessed bushbuck. The bush elephant, blue monkey, Ruwenzori leopard, African buffalo, and the yellow-backed duiker exist in the park but are rarely seen because they have been heavily poached. The animals in the national park are not so common to spot but on a lucky day you will meet many animals and birds, Expect to be amazed by the scenic views of the different craters around the mountain ranges as you come across a host of unusual plants and flowers worthy of a snap shot. This idyllic place attracts some of the most colorful butterflies and birds in the world.

The Rwenzori national park is best visited for hiking Mountain Rwenzori, this is best explored on foot and a good amount of physical fitness should be considered while planning a safari to the national conservation area. There are trekking circuits are well distributed to provide a proper access to the mountain peaks, the central circuit begins at the Nyakalenjgija and the southern at Kilembe, these provide an intense experience of the untold beauty of the Ruwenzori mountain back drop, the trek lasts from 2 Days -12 days while on safari. Guided nature walks in the National park’s vegetation cover is a rich impressive montane forest which offers great views of a number of unique plant, and tree species. One can choose to visit the local community of the bajonjo people of western Uganda, trips can be combined together with those of Queen Elizabeth national park, and Kibale forest national park for a chimpanzee experience.