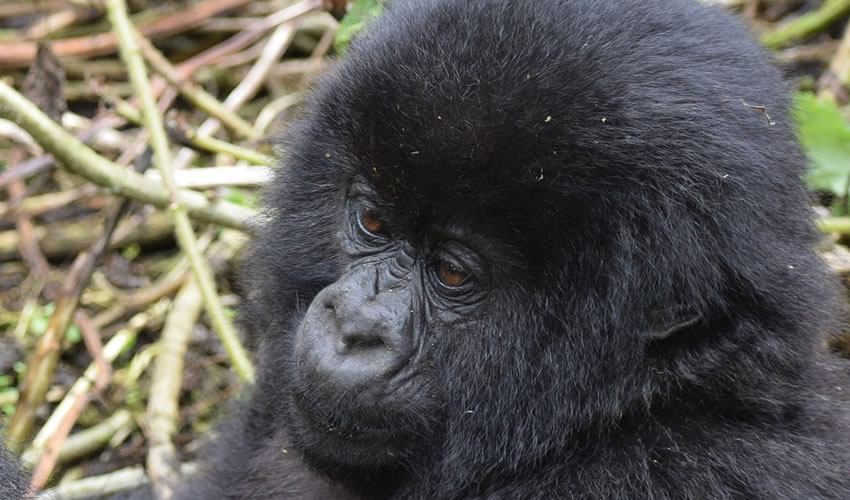 Gorilla Trekking in Volcanoes National Park in Rwanda is a vigorous activity most sought of and best in the country, Mountain gorillas gorilla beringei is a subspecies of the eastern gorilla listed to be critically endangered their numbers had greatly reduced due to several impacts from human activity, natural causes like diseases. However thanks to the government for the continued support, mountain gorillas have been seen rise in number. The primates are the largest living primates on earth they have well-built muscular body covered in fur the beautiful majestic brown eyed species live in Volcanoes National Park without being captivated, they roam freely in the ecosystem feeding in plants ,leaves, dead back trees, fruits, mushroom. And many possible food they can get from the Forest. Gorillas live in only a few conservation areas in the world the Volcanoes national park in Rwanda, Virunga national park in the democratic republic of Congo, Bwindi impenetrable national park in Uganda and Mgahinga national park in Uganda.

Volcanoes national park is strategically placed in the north-eastern part of Rwanda, covering approximately 1600ha of land the forest is mainly comprised of Afromontane forest, bamboo, swampy and marshy areas. It lies within the great Albertine rift valley region comprising of three of the great mountains of the virunga volcanic Massif, mount Gahinga, Mountain Bisoke Mountain Karisimbi, and mountain Sabinyo and mount Muhabura, some of  these are shared amongst the neighbors of Uganda and DRC. Mount Karisimbi is one of the four  highest mountain on the African continent mountain Gorillas love to live along the slopes of the mountain and can only survive in the mountainous region. They nest almost on daily baby gorillas are under the care of their mothers until the age of two. The young ones are so playful that you will find very interesting in a gorilla trekking safari.

Mountain gorilla trekking at volcanoes national park in Rwanda involves hiking through the steep slopes of the mountain in search of a gorilla family, it is done in groups of eight per gorilla family and advisable for one to consider physical fitness while planning on visiting the mountain gorillas. Trekking time depends on how far the gorillas have moved, a number of pre-trekkers go ahead of the guide to locate these animal species for you. It may take a full day or just hours of time to find the mountain gorilla. While enjoying the landscapes and backdrop of the angelic forest. It is thick and full of creeping plants. An hour is allowed to be with the primates as soon as you encounter them while observing the gorilla rules and regulations which will be communicated by the game ranger in charge of the park premises. One must book the gorilla permits in advance in order to avoid missing out and proper preparations to the tour operator, Rwanda gorilla permit goes for $1500.peak seasons for buying gorilla permits lie in June, July, August and September. These are also generally busy touring days in east Africa. Because the terrine is less slippery and the game routes are accessible. Despite these best days to visit the nation park, one can always come anytime of the year.

Travel checklist for a gorilla trekking experience includes warm clothes, long sleeved shirts and trousers, water proof hiking boots, water proof covers for phones and cameras, and any other items of personal nature that may help during the gorilla trekking safari. Volcanoes national park mountain gorillas have been made famous by the American primatologist Dian fossey whose work towards the primates has not gone unnoticed. They have also been feathered in the movie “gorillas in the mist”.

Other park activities besides mountain gorillas involve hiking the Dian Fossey tombs, cultural experience from the Iby’wacu community. Birding in Volcanoes national park, golden monkey tracking in the park. Volcanoes national park is one of those best places to visit an with ease access, it is approximately 2 hours’ drive by road to arrive at the destination trips can be combined together with those to Nyungwe forest national park, and Akagera national park, Rwanda’s only Savannah park. Where to stay in the conservation. Area is not thing to worry, there is available accommodation around the park ranging from luxury to the best budget. Also it is very much possible to trek gorillas when you stay in Kigali.

The East African visa permits traveling through east African countries Uganda, Kenya and Rwanda which was…

Uganda is a beautiful landlocked country in east Africa, it is commonly termed as the pearl…