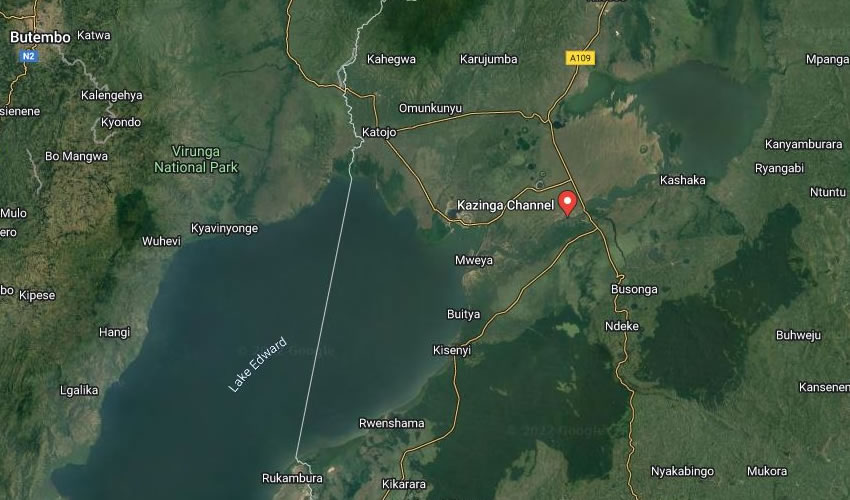 Queen Elizabeth National Park is a beautiful know haven of birds in western Uganda, it is the second largest national park in the country. It is known for abundant wildlife including the so called big four of the wilderness (leopards, African buffaloes, Lions, African elephants). It lies at the back drop of the Rwenzori Mountain in Kasese district, the park was previously called Kabalega national park and later named after the Queen Elizabeth of England following her visit, and it is famous for tree climbing lions. The natural composition of the national park is Magical, the dotted crater lakes are nit to miss, the Kyambura gorge seems like a world of its own in the national park, the animals in the Kyambura gorge seem to be stuck and lost in a world of its own.

Kazinga Channel, is a stream water body connecting two large water bodies e, the wide 32 kilometer stream is an amazing wildlife concentration center, it hosts the largest concentration of the world’s hippos and countless crocodiles, hippos are the third largest mammals of the world, along the northern bank of the Channel is Lake George a small beautiful Lake, this Lake is filled by the small tributaries and streams that flow from the Ruwenzori Mountain, the Kazinga Channel boat cruise is one of the most rewarding in Uganda, you will be filled with a total satisfaction of nature, the animals gather around for pastures, bathing and drinking, expect to see lions, hippos, crocodiles, elephants, antelopes, waterbucks, bush bucks, and many bird species to mention.

The Kazinga channel boat cruise has been organized for a long been organized to enable travelers view wildlife along the Channel, the slow cruise is an angelic way of enjoying the wildlife, as you ride along the cool breeze from the double lakes, the cruise is normally charged by the Uganda wildlife authority, it is done in two sessions beginning at 9:00am and 2:00pm east African time, the beauty of the slow ride along the stream is that you will get to visit fishing villages of the local people in Kasese. The best time to view animals in the park is during the dry season, this place becomes an oasis for animals, they all gather around here because it is the survival point. In the months between January- February, June –September are the dry months of the park, these are also regarded as tourism peak seasons in Uganda.

Kazinga boat cruise in Queen Elizabeth national park is the most angelic thing to do, this can be done alongside Game drives, the Kasenyi plains in the early Morning you will be in position to see the early morning risers like leopards, lions, African buffaloes, African elephants, name it all, experiential lion tracking can be an ideal thing to indulge for those interested in a must see of lions, Chimpanzee tracking in the Kyambura gorge primates survive in the gorge like as though they were trapped in a lost world. It takes approximately 6 hour’s drive by road to arrive in Queen Elizabeth  national park, by road, there is available accommodation offering place to stay for travelers and food.

Kampala is Uganda’s capital city, it is situated in the central part of the country placed…