Murchison Falls National Park is a Marvelous land of wonders to experience the true wilderness of the African continent, it is named after the magnificent Falls Murchison. The park was the first gazette in 1952 in order to protect the animal species that call this home more so the small population of the few remaining Rothschild’s giraffes, it is bisected into two by the Victoria Nile and was initially called the Kabalega National Park during the reign of Idi Amin Dada one of Uganda’s most famous presidents btw later the park gained its name following his downfall. The park is the largest protected area among all parks in the country covering an area space of approximately 3840 square Kilometers. It is situated in northern Uganda in the Nwoya district adjoin other game reserves of Karuma and Bugungu game reserve. It is in this park that you can spot the so-called big four of the wilderness and the fifth can be encountered en route to the park in the Nakasongola district. 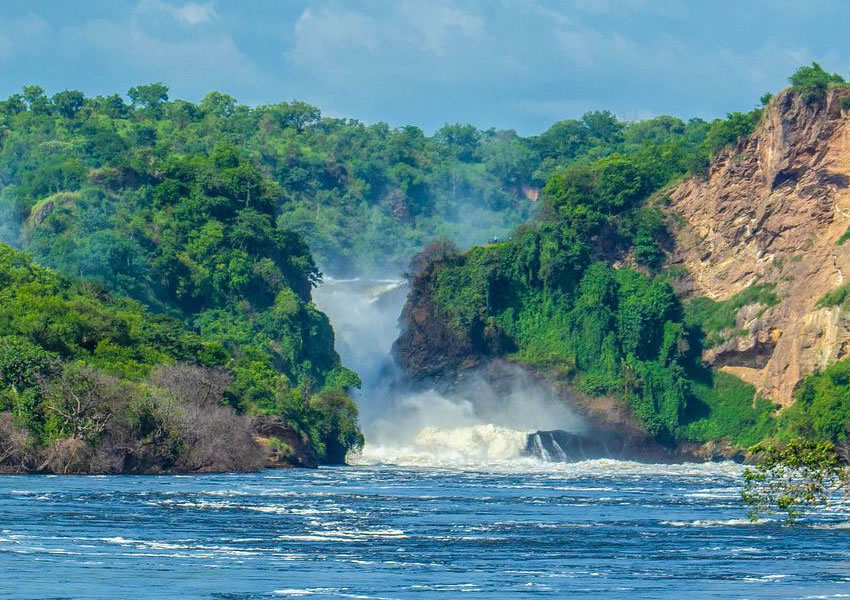 The ecosystem ranges from the open Savannah grasslands, woodlands, tropical rainforests, rivers, and swamps, the vast diversity of habitats provides a home to a lot of Fauna, 87 mammal species have been recorded, for example, Hippos, crocodiles, antelopes, warthogs, waterbucks, bushbucks, African elephants, African buffaloes, Jackson hartebeest, Kobs, oribi, giraffes, Lions, leopards, and many other present animals, there are primate species notable in the park-like olive baboons and Chimpanzee that can be seen in the Budongo forest south of the conservation area. Over 470 species of birds have been recorded in the park to date like the Abyssinian ground hornbill, Denham’s bustard, grey crowned cranes, African fish eagle, giant heron, giant Kingfisher, grey-headed kingfisher, long-toed plover, African darter, goliath heron, black-headed lapwing, yellow fronted tinkerbird, shoe bill stock to mention a few.

Murchison fall is the greatest attraction of the national park, the powerful waterfall is a must-see whether from the top or the bottom of the falls the experience is mouth-dropping as you will experience the water squeeze itself into the 7-meter small slit on the rock, splashing water that oozes and falls down a cliff in a deep roar. The plunge pool is one of those mighty things you may not experience anywhere in Africa. The water flows into the Victoria Nile stretching 20-30 km into the park, it is a breeding place for Fish, hippos, and the Nile crocodiles.

The presence of the attractions of the park presents an opportunity to do several activities including game drives, these are done on the Northern bank of the river, because the animal concentration of Murchison is at the North along the Albert Delta, there are quite a good number of animal species you will encounter while on the drives especially the early morning risers who come out to graze and the carnivorous animalslike lions and leopards. There are proper game routes to follow while on game drives, these are conducted in the morning, afternoon, and evening times.

A boat cruise to the bottom of the falls is one adventurous thing to do while in Murchison falls national park, you will ride for 3 hours while enjoying the cruise of the Nile, it is a special and intimate way of finding love on the Nile, there will be animal sightings along the banks like waterbucks, bushbucks, Hippos and the Nile crocodiles that bask lazily under the sun and on the sand. The Uganda wildlife authority offers a boat for the adventure or one can hire it from the wild frontiers. In the early day, the cruise was accompanied by hiking to the top of the falls from the bottom, however, this activity is quite tricky, and another route has to be taken due to the increase in water levels.

Murchison FallsNational Park’s birding safari is just as rewarding, the activity will showcase most of the Albertine species some of which are endemic to the destination. The park is one of the few places to see the endangered prehistoric shoe bill the park’s impressivebird list gets bigger in April and November because of the migratory species.

Community encounters, the park is surrounded by communities who perform and dance to their traditional songs using the Adungu, the travelers have a chance of meeting the craft villages organized by a team of individuals for example the Bomu women Group in Murchison and at the Mubaku Village, one can buy souvenirs they craft for remembrance of their trip to northern Uganda or indulge in the day to day activities of a village setup.

Accommodationof the park is dotted inside and outside the premises, both banks boast luxury, midrange, and budget Facilities, examples include the Luxurious Chobe safari lodge, para safari lodge, MurchisonRiver lodge, heritage safari lodge, Red chili, Fort Murchison, and many more facilities in the park, these offeraccommodation, meals, and drinks to travelers who visit the ecosystem. Uganda’s oldest national park can be visited throughout the year but best during the dry season of December- February, and June- September, these are tourism peak seasons and also have easy access routes.

Murchison FallsNational Park can be accessed from Entebbe via the Kampala Gulu highway by road, it takes approximately 4-5 hours drive to arrive at the destination. Charter flights can be arranged from Entebbe of Kampala Kajansi to land at the Pakuba airstrip.  While planning a safari to Murchison falls national park, kindly note that the park entrance fees are 45 USD according to the Uganda wildlife authority Tariff chat 2022 for foreign nonresidents. Hiking to the top of the falls is taxed 10 USD and has to be wired money not cash due to an upgrade in the booking system of UWA. Travelers are advised to pack waterproof covers for phones and their cameras, sunscreen, insect repellants, hiking boots, long-sleeved shirts and trousers, binoculars for birders, and any other items of personal nature to enhance the experience. Trips to Murchison falls national park can be interconnected with those of western Uganda.