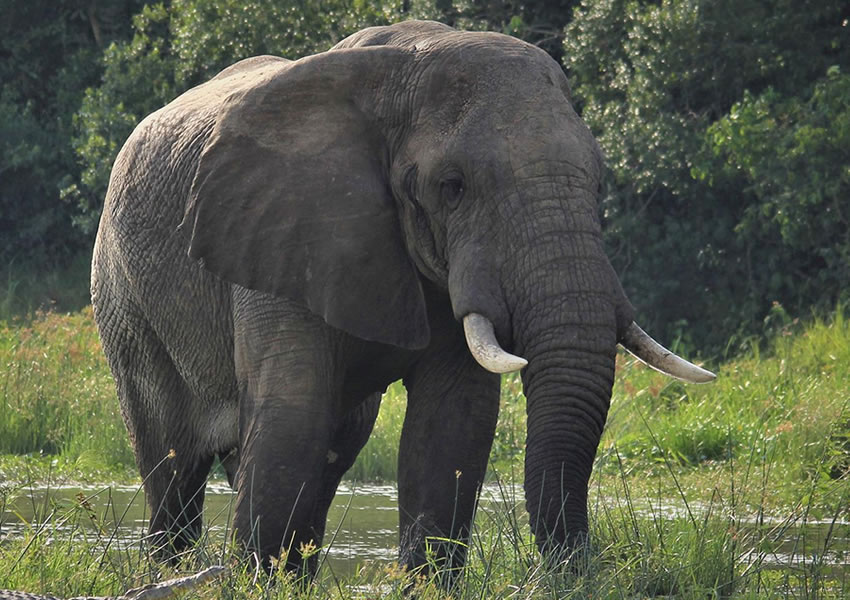 The national park straddles along the equator in western Uganda, it has an angelic view of the back drop of the mountains of the moon- Ruwenzori, the biodiversity of the crater lakes, woodlands, acacia, plants and the forest situated along the Kyambura Gorge id home to a number of animal species and birds, the major attractions of Queen include wildlife, there are about 95 mammal species present in the national park, it is the one of those savannah parks where you can possibly spot the so called big four of the wilderness( Leopards, lions, African buffaloes, African elephants). Other present mammals include; warthogs, hippos, and waterbucks, to mention afew.

Key attractions of the conservation area include the Kazinga channel, a place connecting two rift valley lakes Edward and George, the long stream acts as an oasis to wildlife in the national aprk, it is home to the world’s largest concentration of hippos, attracting many park animals that come around to drink water, and graze on the greener pasture, the Kyambura gorge is not to miss but if nit so careful you might actually miss it, it is a hidden world of beauty in inside of the park, it seems like an abandoned world, the animals in here seem to have been traped overtime and with no way out, the underground of the area is watered by a stream flowing from the edges of the rocks, chimpanzee is the popular resident and other primates.  The Maramagambo forest south of the national park is a perfect place, home to many birds and primates, the Ishasha sector in the southern part of queen Elizabeth national park is an animal corridor connecting through to Bwindi impenetrable national park and the Kibale forest national park, it is the unique identifier of the park only place in the country to find tree climbing lions.

Activities in Queen Elizabeth National Park, game drives done in the morning in search of wildlife the Kasenyi plains, it is one of the few places in Uganda to do night game drives in the guidance of an experienced game ranger, these are done in search of nocturnal species like leopards, lions, it is the best place to go birding while on a Ugandan safari, it has been recorded as an important birding area, according to birding international, there are different places to see birds like the Mweya peninsula, Maramagambo foretst, Kasenyi plains, Ishasha sector. Look out for the African fish eagles, swamp flycatcher, grey headed king fisher to mention.  Boat cruise along the Kazinga channel is a fantastic way to view wildlife and birds, it lasts between 2-3 hours done both in the morning and the afternoon. Chimpanzee tracking in the Kyambura gorge, chimpanzee are said to be the closest relatives to mankind sharing up to 98 % of the human DNA, the chances seeing Chimpanzee in the national are not as thigh as those in the Kibale forest national park. The park can be visited anytime during the year, but best during the months of June- September, and December to February.