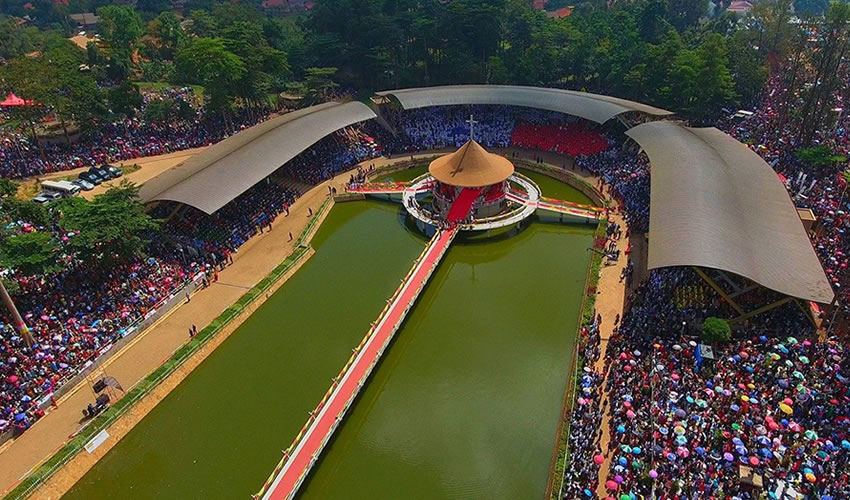 Uganda has a diversity of religions largest population being Christians and Muslims, several sights gather people coming to worship and tour in the country, these include the Namugongo Martyrs Shrine, Gadhafi mosque, Namirembe cathedral, Bahai temple. Faith-based tourism in the country is on the shrive to shine over time travelers from different countries make pilgrimages to religious sites. People travel for spiritual and material blessings and sometimes religious tourism goes beyond to missionary and charity work. Religious tourism has been taking place since civilization pilgrims visit the worship areas from all over the world.

Namugongo martyrs shrine is situated east of Kampala thousands of people flock to the worship area for pilgrimage on the 3rdof June annually in remembrance of Uganda martyrs who were murdered for believing in their faith by Kabaka Mwanga of Buganda between 1885 and 1886, there are two shrines in the area one for Catholics and another for Anglicans beautifully placed with an overwhelming interior, tributes are paid to both shrines to celebrate the Uganda Martyrs day. Worshipers pray and collect holy water for blessings many of which say it works for them.

Gadhafi mosque is an Uganda national mosque built along Kampala hill road, it was constructed by colonel Gadhafi the late president of Libya as a token to the Uganda Muslim Community it is the biggest mosque in the country and a seat for the supreme court of Muslims hosting over 1000 people officially opened in 2007, tourists visit the worship centre led by an experienced Muslim guide who takes them around the mosque while explaining the religion in detail. A fee of 15,000 shillings is charged to maintain the mosque. It has got excellent views of the capital city Kampala with the ability to sight all the seven hills that compose the area.

The Bahai temple is a unique house of worship in Uganda built on 52 acres of land it aims at helping the community members and insinuating a number of  work, it is a rare faith in the country and one of the African temples built in Uganda. Besides praying the architecture of the place and surrounding environment is eye-catching, beautiful songs of birds in the compound and cool air are extremely overwhelming.

Namirembe cathedral is one of the oldest cathedrals in Uganda it was initially called the diocese of Uganda until it attained its name Namirembe from the hill on which the Anglican Church is built, the brick constructed church is also known as St. Paul was built-in 1890, its graveyard contains all bishops that have served the Lord in the place. Visits to the church are mostly Anglicans with church services that spark off every Sunday from 7:00am.

Tourists are free to join prayers in a mosque or church for as long as they are comfortable with praying or have intentions to pray, shrines are always places of adoration and meditation visiting the religious centres can be all year round but best during the dry season in the months of December-February and June to mid –September.

The East African visa permits traveling through east African countries Uganda, Kenya and Rwanda which was…

Uganda is a beautiful country with the loveliest of people in east Africa, many times they…